I watched Marie Antoinette (I know, I know, I'm behind the times) and some things about it surprised me, the most noticeable of which was how haunting the movie was. I think I dreamed about it all night and woke up thinking about it the next morning. Not many movies affect me this way, though intense books sometimes do. With all the visual splendor of the decadently rich setting, I didn't expect it to be so atmospheric. The panoramic views of the beautiful vistas (palace and gardens) with a few people or with Marie Antoinette alone looked incredibly lonely and sad. Marie Antoinette, though she had everything she could possibly want materialistically, did not have happiness much of the time. She seemed a beautiful bird in a gilded cage who was fully willing to take her position in an unfriendly court and even smiled in the face of it. 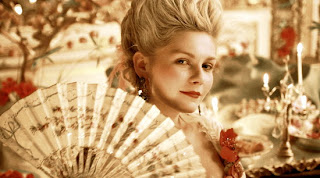 I was glad to see her find some small measures of happiness, with her children, her garden "village" and with her lover, before the terrible fate we know she had, but on which the movie thankfully faded to black.

She seemed oblivious to the plight of the starving people of France in much the same way a spoiled rich teen would be in today's society with her love of clothing, shoes and desserts.

Another unusual part of the movie was the music soundtrack, which at times seemed not to fit at all, especially the masked ball scene, with everyone in period costume, but the music sounded as if it came from a modern disco or dance club. This completely yanked me out of the movie until the song was over. I know they probably did this to appeal to a younger audience, but I don't feel that part worked. One song from the movie, however, is stuck in my head and even though it is modern, it fit fine where they used it.

This is a movie I highly recommend especially if you love historically set movies. It's one of the better ones I've seen.
By Vonda Sinclair at April 04, 2007
Email ThisBlogThis!Share to TwitterShare to FacebookShare to Pinterest
Vonda Sinclair
Vonda Sinclair writes Scottish historical, paranormal and contemporary romance.

I saw this movie a few weeks ago. I REALLY enjoyed it. But personally, I was a bit disappointed that it didn’t follow through to her death. I wanted to see the rest of her story.

So you LIKE beheadings? :-) Ack! I personally like happy endings too much to enjoy the execution, especially since I liked her character in the movie. I can hardly stand to watch the end of Braveheart, even though I love that movie.

LOL! No, I don’t like beheadings. I didn’t want to witness it. But when I see movies/read books about actual people, I want to see (okay, not actually 'see')/read the entire story. That's just me, though ;)