My Favorite Kind of Hero 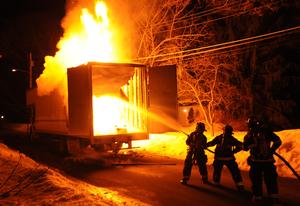 Action hero? Loyal family guy? Sports star? Billionaire who never has to work and has lots of time to romance you? Lol What's your favorite type? (No, this is not about firemen, though they are worthy hero material.)

There are all kinds of heroes in the romance world and any type can work in the right story.

Here's how I encountered my kind of hero in real life. One night last week my daughter started shrieking for us to call 911 and to look out the window. Much to our amazement, the dark night was lit up by a huge truck fire. The wall of flame bursting out the top of the truck was frightening, as we live on a narrow, tree-lined street in a residential neighborhood.

The furniture-filled truck was at my neighbor's house. The two deliverymen had smelled smoke, stopped the truck, and opened the back doors to see what was happening. The flames burst out. They started pulling the furniture out, even though it was on fire. Now, right there, that is going beyond the call of duty in my mind. But they did it. The neighbors began throwing snow onto the burning furniture to contain the flames.

Then the two guys looked at each other and said, "We've got to get this truck out of this neighborhood." They jumped back in the cab, with the fire, I swear, twice as high as the truck, burning behind them, and started driving off. It was surreal to see that burning truck move down the street.

Well, they made it to my house, where they probably saw that the road was a dead end and it was not possible to leave the area. They wisely abandoned the truck.

The fire looked exactly like it does in the picture, and those guys tried to drive the truck away. That kind of action and courage in the face of an emergency is what makes my heart beat faster. You can see the trees (mine) on the right side of the picture and they were rightly concerned that the fire could spread easily. (Luckily, it did not.)

Now when the firefighters showed up, they didn't do anything foolish. They were properly clad head to toe in fire-resistant gear. They did not approach the truck closely. (The heat was intense, even from where we stood, much farther away.) When they ultimately went into the truck, they used oxygen tanks. They behaved sensibly and professionally which, in real life, is a good thing.

Firefighters are trained not to take heroic measures, especially in a property fire, because lives can be lost when caution is not exercised. If you were going to be facing fires for all of your working life, I can imagine you'd lose your taste for drama in a hurry. So I'm not criticizing them. In my saner moments, I appreciate common sense.

But, I have to admit, it was the delivery guys who seeded a story.

Owner of moving company is filling in for a sick employee. Truck catches fire. Fearing the truck might explode (another real possibility), he drives it away from a neighborhood filled with kids' toys and swing sets. Lands at the heroine's house. When the fire can't be put out, he needs to spend the night nearby. (True fact: When they couldn't extinguish the fire, the chief decided to leave it burning overnight with a fire truck standing guard.)

The heroine has an extra bedroom…

Yup. It's the action guys for me. Quick thinkers who defy danger to do the right thing. It has to be a noble cause. I'm not interested in guys who take action just to be moving.

Bottom line, it was the quick thinking that impressed me. No standing around, wringing their hands. That's hero material to me. What about you? PS: My daughter got her first photography credit when she beat out the newspaper's photographer and her picture landed on the front page. How cool is that?
By Carly Carson at February 23, 2011
Email ThisBlogThis!Share to TwitterShare to FacebookShare to Pinterest
Labels: Carly Carson, true life heroes

Oh my gosh, what an amazing story. I don't think I would have dared go near those flames. I don't know where the gas tank is but geez, the whole thing could've exploded. Great material for a story.

Wow I'm glad everyone's okay. I agree with you about the heroic actions. And congratulations to your daughter on the photo credit.

Anita, that's cool that you have your book cover there and now I see Nicole does too. And it brought me right to your site. Good luck with your releases Anita!

That is an awesome (though scary) story and congrats to your daughter for the photograph!

This reminds of that show What Would You Do? Though different because the scenerios usually involve how other people are treated and not extremely dangerous situations like this, but I'm amazed by the people who stand around and do nothing, won't even call 911.

I'm glad there are people who will intervene. True heroes.

I like the idea for your story, too. Good luck with it!
Esme

I've never seen that show Esme, but it's true that many people either can't or won't take action, even in an emergency. The title reminds me of "How Does it Work" which is currently my husband's obsession on TV. (I may have the name wrong.)