I confess, I’ve been addicted to romance most of my life. Not just romance novels, but romance in every form.

Romance and love are things I was drawn to from my earliest years. I was always the little kid staring with wide-eyed curiosity and fascination at the teenagers holding hands. Why were they doing that? Why does that guy have his arm around that girl? My Barbie and Ken were always kissing and going on romantic dates. One of my favorite TV shows back then was The Bionic Woman and, boy, did she have some hot relationships. Or at least, I thought so at the time. LOL My favorite was her romance with The Six Million Dollar Man. I should’ve known then I’d be writing paranormal romance one day about characters with extraordinary abilities. And then, of course, romantic fairy tales like Cinderella or Sleeping Beauty always captivated me.

As a teenager, I quickly became addicted to romance in fiction. Gone With the Wind (the book) was one of the first, along with Arthurian legends, then I migrated over to actual romance where the happy endings thrilled me far more than the depressing endings in most literature. Back then, it didn’t matter if they were “sweet” romances. The feeling of falling in love came through loud and clear in the story. Sigh. Each of those stories sent me to dreamy la-la land for a day or two. Who needed those annoying, immature high-school boys when I could fantasize about a hero who looked like a Greek god? He was actually nice to the heroine and entranced by her. He treated her like a princess and he knew how to kiss.

I knew someday I had to find my own prince charming, a man who would accept me for who I am. A man who would love me unconditionally, recognize my talents and be generous to fault. I feel like the luckiest woman on earth to have found him while in college.

We got engaged on Valentine’s Day. It’s always been a special day we celebrate by going out to eat and exchanging gifts. Sometimes we go on mini vacations. My husband knows that I don’t necessarily want the classic romantic gifts. I only want roses if they have roots attached. I’d rather have a trip to Scotland than diamonds. And please leave that box of candy at the store!
He knows all my deep dark secrets, weird quirks, and he still loves me. That’s the essence of romance that I try to bring to my stories. Sometimes we don’t know what draws us to another person. Maybe on first glance, it’s the color of his eyes, but later you can’t pinpoint one thing. It’s a combination of many things.

There are so many facets to romance, but one of the most important in my opinion is… not only do you love the other person, but you also show them respect. Sometimes it’s not what you say but how you say it. It can be the difference between coming across critical or coming across as understanding. We all want understanding and acceptance, don’t we? This is something I like to explore my stories. I love a hero who is supportive of the heroine, underscoring her confidence instead of undermining it. 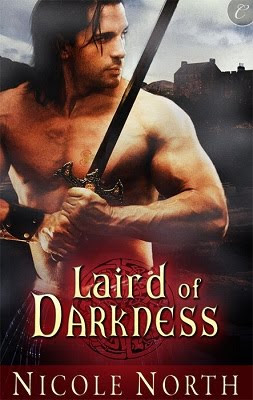 In my upcoming March 21 Carina Press release, Laird of Darkness, the hero and heroine discover in the darkness of night that they have something in common (aside from a sizzling attraction)--they’ve both been traumatized in the dark and bitten by creatures, either normal rats or Otherworld demons. This gives them an unconditional acceptance and understanding of each other. And as a result they can comfort each other in the darkness of night. The form that comfort takes is both romantic and extremely sensual.

Am I still addicted to romance? Absolutely! What about you?

Blurb for Laird of Darkness: Half-Fae Laird Duncan MacDougall is cursed. His nights are haunted by Otherworld creatures sent to kill him. The only way to stop them is to possess the magic bow currently in the hands of his enemy half-brother, Kinnon MacClaren. In desperation, Duncan plans to take MacClaren's bride-to-be hostage and exchange her for the bow.

Lady Alana Forbes has never met her intended, but she hopes he is handsome-and a good lover, for Alana is no innocent virgin. On her way to Castle Claren, Alana and her escorts are intercepted, and she is kidnapped by a man with extraordinary abilities-and every attribute she longs for in a mate.

Duncan didn't expect the woman he thought of as a mere pawn would be so beautiful, and so arousing. Alana is drawn to him as well-but Duncan still needs the bow, and Alana is betrothed to another. How far will Alana go to save the life of the man she's come to love?

I was given about 300 Harlequin romances when I was 13. I don't think my aunt (who'd saved the books from the trash) ever thought I would turn into such an avid reader. I read all of those books and was hooked. I read and read and then when the books couldn't come fast enough to suit me, I started writing. I love reading and writing about impossible characters coming together, or couples who are perfect for each other struggling to reach a happy ever after. It pleases me, lol.

Many of us are hooked on romance, thank goodness, and the genre is growing to include more sub-genres--a good thing, I think. I began reading dark gothic romances back in the sixties. There's nothing like watching how two people find their way to each other. Great blog!

Woo Danica, that's quite a nice gift! Wish someone had done that for me. :) I was addicted to the very sweet historical romances of Barbara Cartland when I was about 15, but I couldn't find enough of them. They were classics.

Vonnie, yes, thank goodness for all the romance addiction. :) And thanks for checking out my post!

I can certainly tell you're addicted to romance, Nicole. All I have to do is read one of your books! =)

Instead of telling your husband to leave that box of chocolates at the store, can I have it? I love chocolate. See, I'm romantic....I LOVE chocolate. LOL!

I don't like the commercialism (or the nasty Divas)that goes along with Valentine's Day, but you're story of becoming engaged on that day is wonderful. That's why I like romance...on any day.

I don't remember when I switched from Nancy Drew to romance, I just know I did. I've been addicted to romance ever since.

Frist time I saw Hubby across the room, I knew he was the man I would marry and I didn't even know who he was as I hadn't met him yet.

Yep, romance is where it's at.

Casey, thanks so much!! I do tend to obsess about the romance when I'm writing a story. It's my favorite part.

Yes, you can have the candy! I love chocolate too. That's the problem!! LOL

I have to say my husband is a very romantic, generous guy. Sigh.

Pat, that reminds me. I used to read The Hardy Boys books instead of Nancy Drew. Loved them! I'm not sure why. I think I liked the interaction and dialogue.

What a romantic story!! I have a cousin who did the same thing when she saw her future husband. Things like that always fascinate me. Is it paranormal or biological?

Great blog, Nicole. It sounds like you definitely found your Knight and I am so happy for you. Lucky for me, I did, too. In fact, never did I date a guy that sent me into crazy heartthrobs and deep sighs until I saw my hubby of 42 years standing under an apple tree at an Air Force picnic. It was love at first sight for me and, crazy as it sounds, I would have married him right on the spot. To this day, I get tingly feelings in my fingers when I touch his flesh. I guess you could call me a romantic! He's always taken care of us and earned respect by all who meet him. I also try to put his charactistics into my heroes, but do get into trouble with my CPs sometimes for having them fall in love to quick...they don't understand that I know it happens.

As a pre-teen, I escaped "real life" by immersing myself in romance novels and I guess...now that I write them, I still do! Nothing makes a day more complete than losing myself in a wonderful romance...whether I'm writing it or reading it. Hubby and I have been married so long, our "views" on romance have changed. After thirty-one years, nothing touches my heart more than him filling up my gas tank so I don't have to do it! LOL! How's that for romance? ;-)

Oh romance is something I can't go a whole day without thinking about it. I consider myself a romantic and I just melt when my DH does things out of the ordinary to show he loves me! I eat it up and I swoon.

*stands up and wrings hands nervously* My name is Renee Vincent....and I am addicted to romance.

Thanks Paisley!! Yes, I love my knight! : ) What a beautiful, romantic story of you and your husband meeting!! Thanks for sharing it!

Maeve, I love those kinds of romantic gestures! At first glance it may not seem romantic to some people, but those are the ways, day to day, that men show their love... making sure his loved ones are taken care of and that he can take some of the hardship away. Pumping gas, washing the car, and lots of other chores. Stopping to bring dinner home once every week or two so I don't have to cook all the time. Cooking a meal on the weekend.

It is also romantic when a man notices what you love or what you enjoy, and then gives you something related to that. For instance, photography has always been an important hobby of mine and one of the first gifts my husband bought me (while we were dating) was a really good camera to use for photography.

I've always been drawn to romance too. The first "romance" series I read was Sweet Valley High. I got so sucked into Elizabeth and Todd's relationship. Didn't care a wit about Jessica. Just wanted to read the romance, lol.

Cool, Esme! For some reason I never got into those, but I'm sure they would've been interesting for me.