I've never feared Halloween, but I've never been a big fan of the holiday. Never was really into dressing up or dragging my kids around in lousy weather to beg candy from the neighbors.

But this year...this year we got talked into dressing up with a group of friends and going out to the local Legion to compete in their Halloween costume contest. Of course, there was dancing and drinking involved. And a lot of laughter as well. You see, we dressed up as crabs! 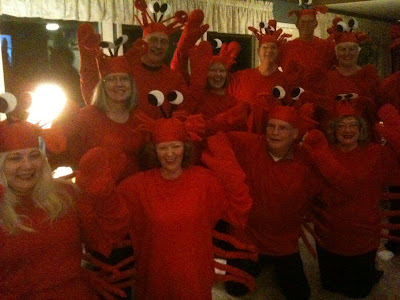 When the costume parade started (yes, we had to parade around the room twice!) we were wrapped up in a net (black snow fence) and hauled around by a guy dressed up as a lobsterman. We won best group prize!

Of course, the prize wasn't the point. It was getting together with friends and not being afraid to be absolutely ridiculous. And having a great time doing it! I enjoyed Halloween a lot more this year.

And as long as we're talking about Halloween, I'll take a moment to mention my only story that is holiday related. It was my very first release and it still remains one of my best sellers, so if you haven't read it yet, and like a little bondage with your community Haunted House, you might want to check out Nothing to Fear. 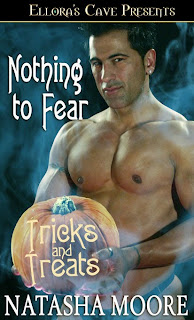 And here's an excerpt:

Kelly’s heart pounded as Lisa led her up the long, steep staircase with its intricately carved spindles. The old Bartholomew mansion was the perfect venue for the haunted house, with its many rooms and dark, old-fashioned décor. There was a rumor that this house on the hill had been a bordello in the old days.

“You just have to scream your head off whenever the door is opened,” Lisa was saying.

“We’ll be taking groups through the house one at a time. They’ll have to wait in the spider web room. Cool, huh? When it’s really busy, you could be on every fifteen minutes or so. I’m going to be leading each group through, telling scary stories to lead up to each room. The doors will be closed until I open them. So when your door is opened, you need to scream for help at the top of your lungs and the villain will charge the door with his weapon and the group will scream and I’ll close the door again. Nothing to it. You just have to be ready when I slam the door open.”

“Got it.” Tied to a bed. Straining at the ropes. Begging for help. Why was she getting all excited at the thought? Kelly knew it was wrong. She should be frightened. She was frightened…by how aroused she was at the thought. By the way her nipples were prickling. The way her skin tingled. Her panties dampened.

They passed by the first door at the top of the stairs. Looking down the long, straight hall with all the doorways, Kelly could believe the bordello stories.
“Matt Dunn and Kyle Parker are ghosts in the first room,” Lisa said. “You’ve got the second room on the left.”

“Wait, Lisa,” Kelly called out. “Who’s going to be the villain?” Who was she going be shut up with? Tied up with?

But Lisa was already pushing the door open. Faded red flocked wallpaper covered the walls. A four-poster bed sat in the middle of the room, covered with a black bedspread. The floor was worn wood. “Hey, you look great!” But Lisa wasn’t talking to Kelly, she was talking to someone already in the room.

Kelly froze in the doorway as a tall masked man, dressed from head to toe in black, stepped away from the bed. A black hood covered his entire head except for holes for his eyes, nose and mouth. The sleeveless black T-shirt clung to his sculpted chest and his muscled arms were tanned. Black pants and shoes completed the intimidating outfit. Her heart pounded so loudly she couldn’t hear what Lisa was saying. “Dress? Did you say something about a dress?”

“Jeans and sweatshirt just don’t project the same image as a dress,” Lisa said, already walking toward the hallway, ignoring Kelly’s pleading look. “Gotta run. You and Mason can work everything else out.” She glanced at her watch. “You’ve got less than half an hour before the first group will be coming through.” Then she was out the door, shutting it behind her.

The slam of the door echoed in the silence. Kelly turned around slowly and looked up into the deep, dark eyes staring at her out of the mask. Of course, it was Mason. Her hands shook as she clasped them together in front of her. Oh God, it was Mason.

He slid the mask off his head. His eyes were what had first attracted her to him, and they were still like melted dark chocolate. His head was shaved smooth as always, a dark shadowy hint of hair on his head and jaw. The diamond stud in his ear twinkled beneath the light from the chandelier.

“Hello, Kelly.” His deep voice was a touch amused. Well, she didn’t find anything amusing in the situation. He was the one man whose mere touch frightened her because it made her desire things she shouldn’t want. Made her crave things she didn’t understand. Just a glance from him made her weak in the knees and made her want to drop to her knees before him.

And right now the thought of being tied to that bed with Mason standing over her froze her to the spot at the end of the bed. She avoided his eye, but in doing so focused on the bed, the black velvet bedspread, the tall thick bedposts at each corner. Would he stretch her tight when he tied her to the bedposts? Or would he give her wiggle room? And the thought of her body wiggling beneath Mason’s heated gaze made her shiver. But was it from fear? Or excitement?

“You better get changed."

Hope you have a great Halloween. And if you don't get dressed up, I hope you at least have a chance to laugh with some friends.

Natasha
FLAUNT IT - Available now
RISK IT - Available for pre-order
www.natashamoore.com
By Natasha Moore at October 31, 2011
Email ThisBlogThis!Share to TwitterShare to FacebookShare to Pinterest
Labels: Flaunt It, Halloween, Natasha Moore, Nothing to Fear, Risk It

What a clever idea! I normally skip right past Halloween, but this year we got into the spirit as well and dressed up for a small party with some friends. It's just some nice fun as we amble into wintertide. :)

Those crab costumes are hilarious. I enjoy Halloween though. Love taking the kids out and having them come to the door. They're so cute!

Hi Cameo. It ended up being a lot of un.

Hey Carly! We didn't have too many kids come to the door last night, but there were some really cute ones :)