How to Die in Croatia 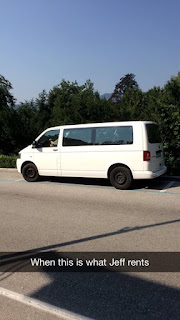 How to Die in Croatia
Drive a car. Seriously. It's a lovely country. You should visit. But be careful if you rent a car.

I shouldn't actually use the word 'car'. No, because hubby wanted a van. Not just any van. A nine passenger van. Our family consists of five people. Plus, admittedly, a fair amount of luggage. (You can't travel for 2 weeks with an overnight bag.)

Right from the beginning, he stated that we needed this monster vehicle. All I could picture was us in this van, hogging tiny European roads, and searching endlessly for parking spaces the size of a double-wide. So I talked him into renting an SUV with a trunk. I thought.

We got to Zagreb, Croatia and I took one of the kids to a little cafe for a snack and he went to get the car. You know what happened.  When I came out, what was I the proud possessor of? Yes, a nine-passenger van the size of the Loch Ness monster. You can see it above in all its glory. Here is the cute cafe in the Zagreb airport. 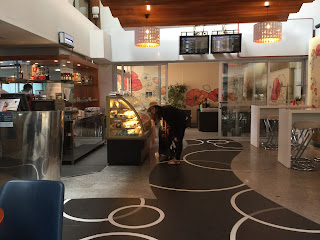 We did a LOT of driving in Croatia. In fact, we virtually circumnavigated the country. However, it wasn't the van that was the problem. It was the other drivers. Ack! Croatia has some of the most scenic roads in the world. The scenery is GORGEOUS. But if you have a nerve in your body, you can't enjoy it. Aside from one awesome new turnpike, the roads are narrow, curvy, one-lane roads that wind through endless mountains and drop off shoulderless, directly into the ocean. 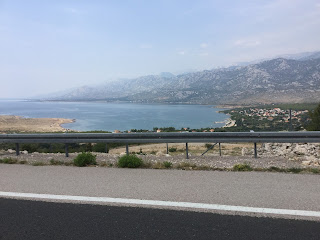 Speed limits are high, traffic is constant, and trucks chug slowly up the mountains, enraging the drivers behind them. The game all Croatian drivers appear to enjoy is to beat the trucks by overtaking every car in the long line, one at a time. You see the car come up behind you, pull into the opposing lane, right in the face of 70 mph oncoming traffic, and try to squeeze in front of you. Of course you let them in, because otherwise an accident is certain. It's a game of chicken, and they don't play to lose. Then the next car behind you pulls into the oncoming traffic.

I suppose there are those who will only participate in this death-defying game when there's a dotted line for passing, but they must be viewed as cowards. Everyone else views the straight line in the middle of the road as a signal to pass immediately, lest you lose this opportunity to kill yourself and everyone in sight. It was so bad that one of my teens actually said, "Maybe in Croatia, the straight line is the one that means you can pass." 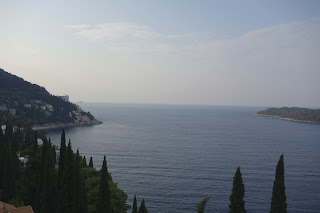 Of course, we did see the exact accident you would expect to see. First, we saw the tire, complete with its axle, sitting on the road in front of us. A bit later, in our lane, was the busted car missing its tire. In the opposite lane was the other car, also missing it's driver side front tire. Someone had misjudged the passing and they hit each other in the same spot, front drivers side, knocking a wheel off each car.

Despite all this, you should visit the country. The scenery is awesome, and so are many of the coastal towns and islands. And, oh yeah, hubby was right about the van.

Next time: Hubby tries to return the monster van at midnight at the airport in Split. Poor guy.

By Carly Carson at October 16, 2015
Email ThisBlogThis!Share to TwitterShare to FacebookShare to Pinterest
Labels: Carly Carson, Croatia, How to die in Croatia, Renting cars in Croatia, Zagreb airport