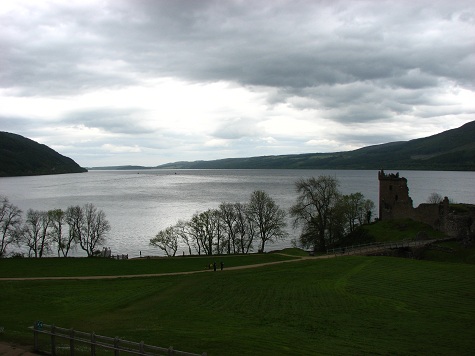 Urquhart Castle on beautiful Loch Ness is one of the most popular and most visited ruined castles in Scotland. The times I’ve visited it, it has usually been more crowded than some other castles. This is not surprising given its convenient location beside Loch Ness. Anyone going from Inverness to Isle of Skye or almost anywhere in the west will likely have to pass the castle, or like we were, going from Argyll in the west to Dunrobin on the east coast. 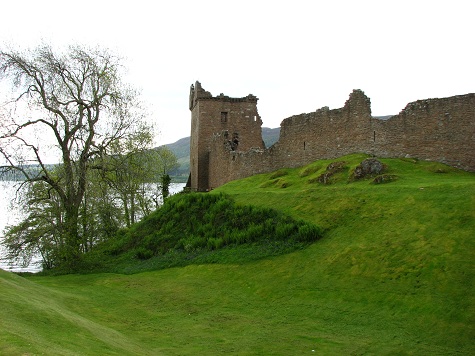 Urquhart Castle is maintained by Historic Scotland. Though I don’t have a photo of it, the castle grounds has a great visitor centre with an exhibition and audio-visual display as well as many medieval artifacts which were found on the grounds of the castle, plus a café, and excellent shop. 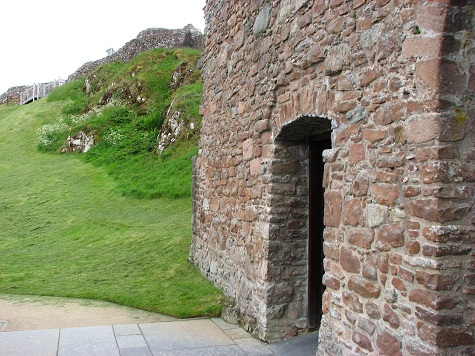 Urquhart is situated on a rocky promontory beside Loch Ness in Glen Mor, or the Great Glen. This glen, created by glaciers during the last ice age, is sixty miles long.

Loch Ness is 700 feet deep. The water flows out the north end through the River Ness at Inverness into the North Sea. 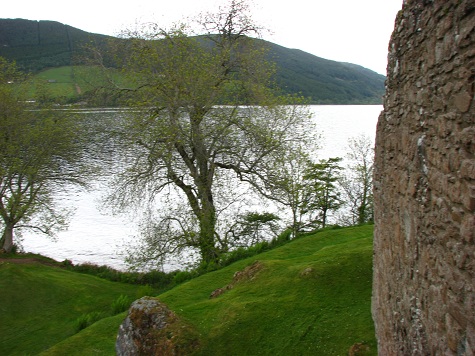 Evidence of human habitation on the site where Urquhart sits goes back to at least 2000 BC, based on a nearby burial cairn. Remains also show that the Picts had a fortification here. It is a good spot for keeping an eye on the loch and who might be traveling along it. Hundreds of years ago, before roads existed in the Highlands, most travel was done by boats, galleys or birlinns along Scotland’s many lochs and along the coast. 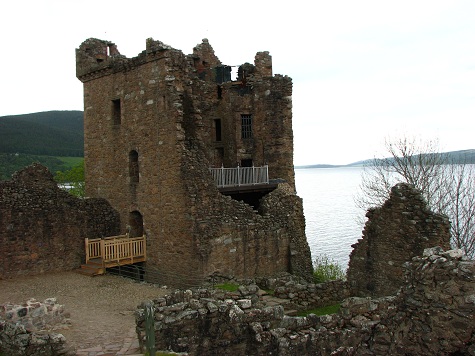 History and legend says that St. Columba traveled from the Dál Riata Kingdom in Argyll to the Great Glen before 597 (perhaps around 580) in order to convert the Picts, including one of their leaders, an elderly noble named Emchath, to Christianity. St. Columba is said to have had a confrontation with the Loch Ness Monster or “Nessie”. 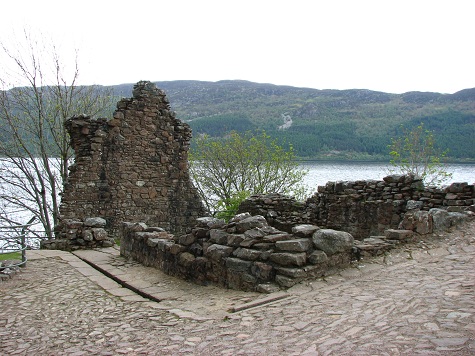 Urquhart has a long, complex, and turbulent history. Alan Durward, the son-in-law of King Alexander II of Scotland started building Urquhart around 1230, after a rebellion in the area was thwarted. The king decided a fortification was needed to keep the locals under control and gave Dunward the lordship. 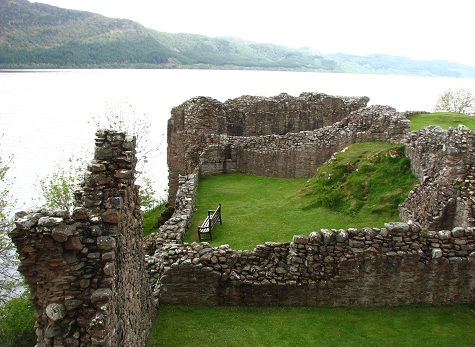 During its heyday, this castle saw major amounts of conflict and often switched hands depending on who was king, and who wanted to defeat the king. 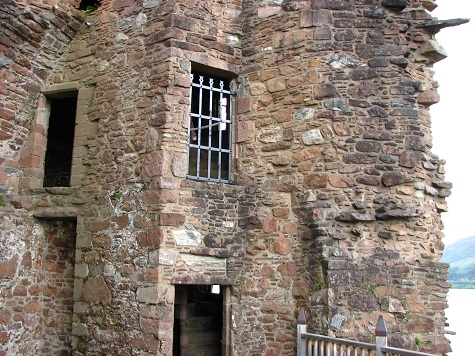 After King Alexander III died, his apparent successor was his six-year-old granddaughter, Margaret, The Maid of Norway, who had been raised in Norway. The little girl was sent for, but died before she arrived in Scotland. Edward I of England had planned on marrying her to his young son. When that fell through, Edward served as what was supposed to be a neutral party in choosing the next king. He chose John Balliol as vassal king because he knew he could control him easily. Edward gave Urquhart to the Red Comyn (John) in 1275. After several defeats, John Balliol was forced to abdicate to Edward. At this time, many of Scotland’s castles were under English control. 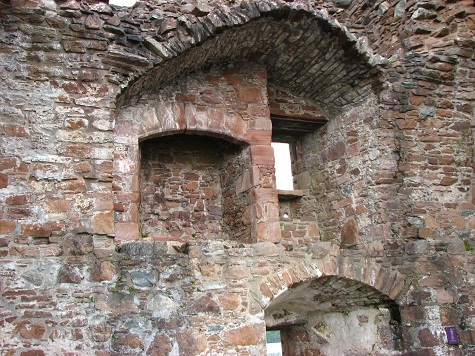 In 1297, Andrew Moray, with the support of Robert the Bruce and Sir Alexander Forbes, took Urquhart Castle from English control. This was during the time William Wallace began his campaign against English rule. However, in 1303, Edward I’s army captured and overtook Urquhart again and gave it back to the Red Comyns, who craved having local power. 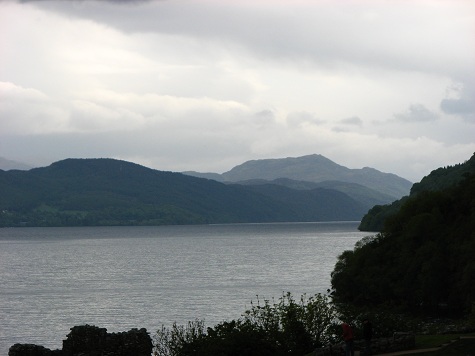 After many years of war, in 1306, Robert the Bruce was crowned king of Scotland. He defeated the Comyns and gave Urquhart to the Earls of Moray. They kept it until 1346 when it was returned to the Scottish Crown. The castle was then renovated and repaired.


Clan MacDonald, the Lords of the Isles, had major conflicts with the Scottish Crown during the 1300s and 1400s and Urquhart Castle was right in the middle. The MacDonalds supported Robert the Bruce, but not the Balliols when they were returned to power. The MacDonalds used the Bruce and Balliol conflict to further their own agenda, which practically destroyed the local area and people around Urquhart because of all the fighting. The castle fell several times to the MacDonalds, only to be retaken by the crown each time. 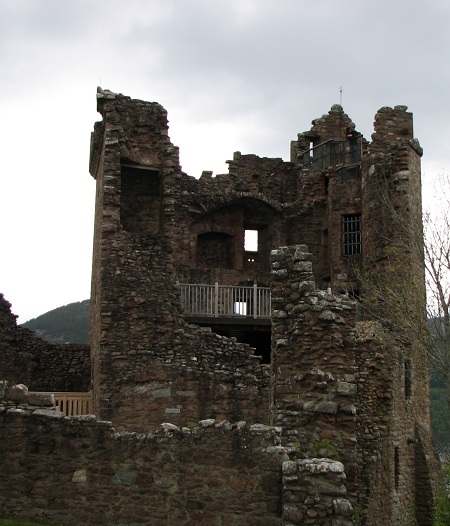 The MacDonalds lost their power for several years, when there was a brief peace and the Grants of Frenchie ran the castle for the Gordons of Huntly. In the early 1500s, however, the MacDonalds came back and attacked the castle twice, killing a large portion of the population of the Great Glen each time. Urquhart Castle was abandoned in the 1600s. The people of the Glen carried the castle’s stones away to add to their own homes and buildings. 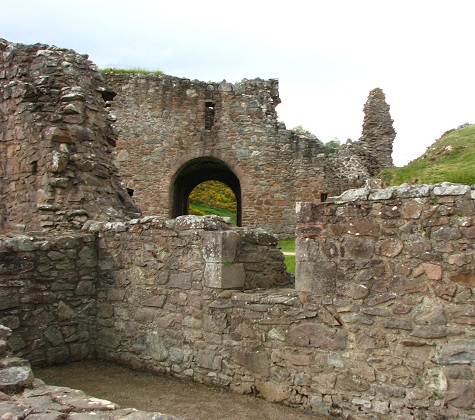 In 1689, Captain Grant held a garrison here for King James VII of Scotland and II of England, the last Stewart king, while he was in exile.  In 1692, the English blew up the castle to keep it from being used by the Jacobites. The castle was left in ruin and in the early 1700s a wind storm blew down the south west wall of the tower house. 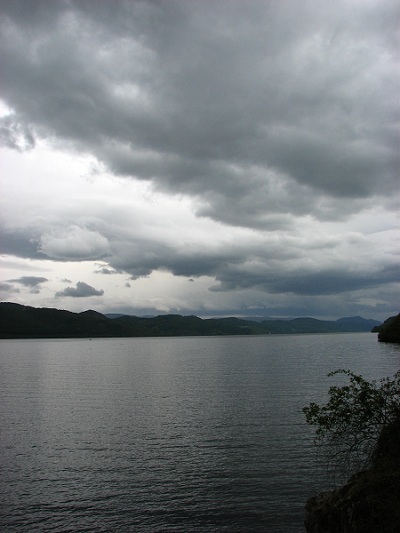 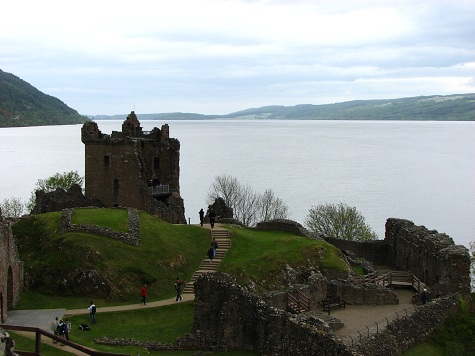 Urquhart was once one of the largest castles in Scotland and is still one of the most impressive, partly because of its beautiful, mysterious and romantic setting on the shore of Loch Ness and the lone tower that remains.

I hope you enjoyed this virtual tour of Urquhart Castle and its history.

Wonderful blog post. The photos are amazing! I've always wanted to visit Scotland, but haven't got there yet...someday. Thanks for sharing.

Beautiful pictures and wonderful post. I enjoyed going back through your words and pics. One day I'll get to go back for real.

Thank you for the wonderful trip to that part of Scotland and the history lesson.

Thanks, Lawna! I hope you get to visit Scotland. It's amazing.

Teresa, thanks, and I hope you do get back to Scotland very soon!

Anonymous, thanks for checking it out! I'm glad you enjoyed it.

Another wonderful post. Your pictures are so vivid. It's easy to picture myself standing in the spray coming off the Loch. I think next year I'll start digging into the family history(Father's father was Irish) This is so stimulating.

Thanks Cora! I thought you were going to say next year you are going to Scotland. :) Some of my ancestors were Scots-Irish. In other words, they were Scots who moved to Ireland and then on to America.

Fabulous! I loved the day we rode over Loch Ness and spent time exploring the castle grounds. In fact, when we rode out onto the Loch I started crying. Have no idea why, but for some reason felt like I'd come home. There certainly is a lot of history around this place. Thanks for the great article, Vonda.

Love your pictures and posts on Scotland! Keep 'em coming, I'm living vicariously through you :)

That's fantastic, Paisley, that you felt such a connection to the place. I can certainly relate. Thanks for taking a look at my pics!

Eliza, thanks! I'm glad you're enjoying the little trips to various places in Scotland.

I've been here! Urquhart Castle was very interesting. I visited it in the fall of 1998, the amazing thing to me was the graffiti on the walls. I'll have to dig up my pictures to see how much it's changed since I visited it.
Q

Very cool, Qwillia! It's one of the neatest places, isn't it? I can't imagine graffiti on it though. Yikes. They must have removed it. Thanks for checking out my pics!

Love the history you put in with your fantastic pictures, Vonda. It's an amazing place. I'll definitely stop there if I ever get to Scotland.

Wow on the pictures! I've always been fascinated by Loch Ness and the monster. I'd love to visit Scotland someday. Didn't know what Scots-Irish meant. That's what my father said he was.

Thanks, Vanessa! It's interesting for me to learn some of the history of the places I've visited.

Virginia, I'm glad you like the pics. Thanks! The history of the Scots-Irish is very interesting too. A lot of them were a part of what's sometimes called the Lowland Clearances.

Amazing photos and wonderful information. I haven't been to Scotland yet, but this castle just got added to my itinerary. thanks so much

Thanks, Louise! I hope you get to book a trip to Scotland soon. It's worth it!

I just adore Loch Ness, and Urquhart is one of my favorite castles, especially becuase it has ties to my family. (Grants of Fruechie) I can't wait to get back there again!!

Until then I love living vicariously though you!!

Thanks again for sharing!