An Awesome Review for My Brave Highlander

I loved the new review I received for My Brave Highlander audio book from BookTalk with Eileen! 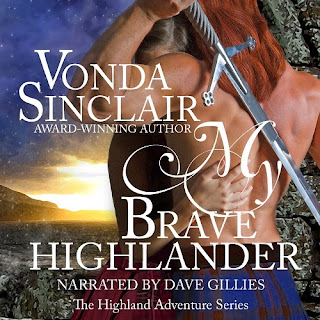 Review: This author has a way with words, whether they be the inner dialog of the characters or actual dialog, she is simply one of the best. From Lady Isobel’s escape into a snow storm with a broken finger and little provisions, to happening upon Dirk MacKay and Rebbie when Lady Isobel and her maid were half-frozen, to meeting Dirk’s clan, brothers and step-mother when all thought him dead, to treachery immediate at hand, what a fantastic adventure! With hand clutching my throat the listen captured my Scottish heart.

But how to escape the treachery of Nolan? Would her betrothed, Laird Toran McCloud, not see she could no longer marry him and live under the same roof as his licentious brother?  Would Cyrus, Isobel’s brother, insist she return to her betrothed?Lady Isobel was daring, brave, gusty and still a virgin after her widowhood. Her choice was Dirk MacKay whom she found was all goodness.

Dirk wanted to return to his sick father, after 12 long years away having received a missive from the only man who knew him alive, his uncle.  Would his Da still be alive when he returned?  Would his Da understand why he had to fake his death when dead he surely would have been if he stayed?
Dirk’s step mother, had two faces, one for her sons and the other for her stepson.  She had always hated him and was outraged he was not dead. How would she get what she wanted now?

This story is one I easily could listen to again.  Dave Gillies has wonderful storytellingability with the versatility of his voice, portraying very clearly the emotional mindset of the characters.

Who are characters memorable to me other than Dirk and Isobel?  Rebbie, Dirks best friend who wouldn’t let him take the journey north alone; Haldane, youngest brother to Dirk, twisted by his step-mother’s desires; gifted Aiden, brother to Dirk, who remembered his brother, only wanted to do what is right and honorable; Myra, Dirks step-mother with a blackened heart, who could act so ruthlessly for her sons and what she thought was best for them.

Author Sinclair has woven a wonderfully adventurous story with honorable and upright highlanders who are the perfect heroes.  She never disappoints me as I work through The Highland Adventures.

Here is a sample of the audiobook:

Blurb: Battle-hardened warrior Dirk MacLerie isn’t who everyone thinks he is. He’s Dirk MacKay, heir apparent to the MacKay chiefdom and Dunnakeil Castle on the far north coast of Scotland. When he returns home after a long absence, will his clan know him, and will the duplicitous enemy that tried to murder him 12 years ago kill him in truth this time?

Lady Isobel MacKenzie is a beautiful, young widow betrothed to yet another highland chief by her brother’s order. But when her future brother-in-law accosts her and threatens to kill her, she is forced to flee into a highland snowstorm. When she runs into a rugged, imposing man she thought dead, she wonders whether he will turn her over to her enemy or take her to safety.

Dirk remembers the enchanting, dark-eyed Isobel from when he was a lad, but now she is bound to another man by legal contract, an important detail she would prefer to forget. She wishes to choose her own husband and has her sights set on Dirk. But he would never steal another man’s bride, would he? The tantalizing lady fires up his passions, testing his willpower and honor at every turn, even as some of his own treacherous clansmen plot his downfall.
©2012 Vonda Sinclair (P)2015 Vonda Sinclair

My Brave Highlander is available at Audible, Amazon and iTunes.
Thanks!
Vonda