After visiting the three sites, Callanish Standing Stones, Dun Carloway Broch, and Gearrannan Blackhouse Village on Isle of Lewis, we got off the bus in Stornoway. With about two hours to wait for the ferry, we had time to shop and eat. I bought some things, like scarves, at a street fair. (I love scarves.) It was around five pm and since we didn't know anything about Stornoway we were unsure where the good restaurants were. Actually, we had a hard time finding any restaurants at that late hour, but finally found one in a hotel. The food was delicious.

Stornoway has been an important port for many years, and was likely recognized from earliest times as having a safe harbor because of the natural landscape. Two "arms" of land jut out on either side making the waters much calmer than in the minch, the stretch of water between the islands and the mainland.


Lews Castle was built between 1847 and 1852 by James Matheson who had bought Lewis in 1844. The castle was built on the site of the former Mackenzie's Seaforth Lodge (The Seaforth Lodge is said to have hosted the planners of the 1719 Jacobite Uprising.) Lews Castle was luxuriously furnished with crystal chandeliers, carved panels and tapestries. Lord Leverhulme, founder of Lever Brothers soap company, bought Lewis in 1917. In 1923, he gifted the vast estate of the Isle of Lewis to the citizens of Stornoway. It is administered by the Stornoway Trust on behalf of the townspeople. 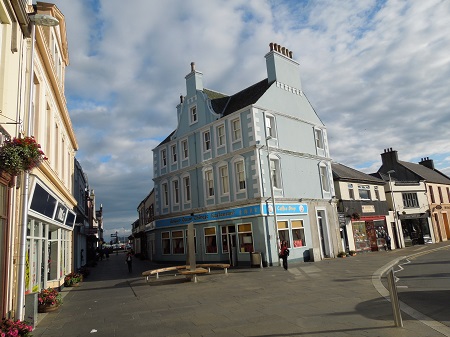 No one knows when Stornoway was settled, but it was long before the Vikings started raiding in the ninth century. Chambered cairns nearby suggest the Stornoway area was settled before the Iron Age. In addition to the safe, natural harbor, other features no doubt valued by early inhabitants include fertile soils, shallow waters of Broad Bay for fish spawning, freshwater rivers that drew in salmon and sea-trout and safe anchorage. 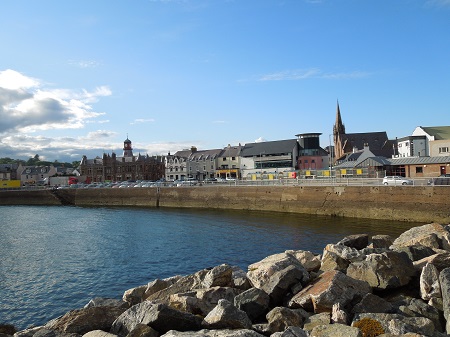 Stornoway is home to the Western Isles Council and other educational, sporting and media establishments. Education is important on Lewis, and our tour guide pointed out many of the newly build schools.


When the Vikings rowed their longships into the bay they named the place 'Steering Bay' in the Norse tongue. And this name eventually became Stornoway. It is not known whether the Vikings killed all the native residents they found in the Stornoway area or whether they intermarried with them, or maybe a little of both. The Norse ruled Lewis for a time, until 1266 when the Treaty of Perth came into effect and the Norse were ordered to leave. All of Norway's possessions on the western seaboard were ceded to King Alexander III of Scotland. But Norse influence remains, including place names and clan names such as MacLeod, Morrison, Nicholson, and MacAulay.

After we ate, we walked toward the ferry terminal early because we didn't want to miss the ferry, the last one for that day. We watched the ferry coming into port, and noticed several police officers heading through the terminal waiting area along with a black and white sheepdog, a Border Collie. An officer put the dog to work, sniffing each of the passengers' bags. But apparently nothing was found and no one was arrested.


Lewis was under the leadership of the Lord of the Isles from 1354 to 1493. By the end of the 14th century, Lewis was held by one branch of the Clan MacLeod, with Harris (which connects to Lewis) being controlled from Skye by another branch of Clan MacLeod.

In the 15th century the MacLeod clan possessed the Castle of Stornoway. It was said to resemble Kismul Castle. It was a symbol of power and status for this ruling clan. It was also a target of attacks from the Scottish Parliament in Edinburgh who wanted to curb the independence of the unruly Clan MacLeod. The castle was attacked in 1506 and 1554 but survived both sieges. But it could not survive Cromwell's Commonwealth who caused the structure to be 'broken down.' Only ruins remained until 1882 when the site was demolished and overtaken by improvements to the harbor. Only a plaque remains as evidence that a castle once stood on the town's foreshore.

On board the ferry, we found a warm comfortable place to sit inside, but I did venture outside in the icy wind a few times for some pics. Here's one of them as the sun was setting.

Thanks so much for visiting Stornoway with me! :)
Vonda
www.vondasinclair.com

Excerpt from My Daring Highlander:


Seona's horse bolted during a gale storm in the Highlands. Keegan chased after her and pulled her off the terrified horse.

What a lovely town. Thank you so much for visiting Scotland for us!!

Thanks Ella! I'm glad you liked it!

It is a very lovely town. The colors of the sunset are amazingly beautiful. Thanks for sharing!

Thanks for checking it out, Vanessa! I loved Stornoway.

Love, love the pics! So fun to see! Thank you for sharing, Vonda!

Thank you, Lana!! I'm glad you enjoyed it!

I too love your pictures and history of Stornoway. Thank you for sharing!

Lyn, thanks!! I'm glad you liked it. I enjoy taking pics and sharing them.

You did a lovely presentation on the area, Vonda. I could move into Lews castle right away if the bathrooms have been renovated! Looks like you had a wonderful trip... what one has to do in the line of research! Thanks for sharing.

Gorgeous pictures. I'm so going to visit Lewis next time! Enjoyed your excerpt :-)

Gemma, thanks so much! Yes, Lews would be a beautiful place to live. I think they are working on renovations. I love research that takes me to Scotland! :)

Amy, thank you! I'm glad you enjoyed the photos and excerpt. You will love Lewis!