Why are High Heels Sexy? 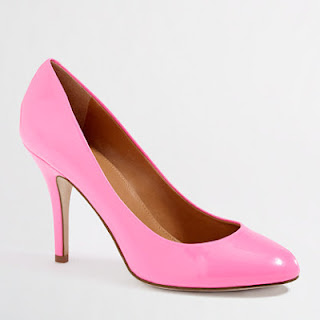 I loved this shoe the moment I saw it. It's a classic look (except for the color), not the truly difficult 5" platform shoes that are so common today. But, with any high heel, the question is - why do women torture themselves by wearing shoes that are uncomfortable, hard to walk in, and harmful to their health?

The easy answer is that women wear high heels because men like them and they want to be attractive to men. Which begs the question – why do men like women in high heels?

Some researchers decided to find out. They had women walk in flat shoes and also in high heels, then made videos showing only points of light to represent the women. They didn't show the actual women so there was no bias in terms of what they looked like.

Wow! That's a lot of positive feedback from a mere shoe.

And, surprisingly, both women and men agreed that the heels had this awesome power.

The researchers said this finding was due to the fact that high heels force women to take shorter steps (we all know how that works) and also, the heels force "increased rotation and tilt" of the hips. Yes, a sexual stimuli. So, a high heeled gait, even when shown only as points of light, is younger, more feminine and more attractive. That's a powerful reason to torture yourself.

So there you have it. Dig out those heels!

I did my part. I bought two pairs of that beautiful pink shoe shown above.

For my teenaged daughters. Ha

Anyone want to guess who makes this shoe?
By Carly Carson at January 31, 2013
Email ThisBlogThis!Share to TwitterShare to FacebookShare to Pinterest
Labels: Carly Carson, High heels, sexy high heels

Let me guess...the company that funded the research?

I have to admit I love the look of high heels as well, but I own very few. It has to be a very special occasion to get me in a pair. Give me my flip-flops any day of the week :)

Haha, good answer. But no. You know flip-flops aren't good for your feet either. Ditto the ballet flats. Sigh. I have a dd with a shoe fetish (and foot problems) so now I seem to have a fetish as well.