A Trip to Duart Castle

The day we visited Isle of Mull and Duart Castle was cloudy and windy. Based on the forecast, we knew the weather would only get worse, so this was our last chance to visit the island. Sure enough, the next day no ferries were running out to the islands at all because of insane winds. We parked in Oban and bought a ticket which included the ferry, bus, and castle tours all in one.


I was also very sick by this time. I'd caught a cold soon after arriving in Scotland, but I was determined to not let it stop me. The ferry ride was nice with great views. You can stay outside or go inside where it's warm and have a snack or coffee. The ferry also has a gift shop, restaurant, lounge, and several other things. I sent my husband out to take pictures. :) He took these first three. 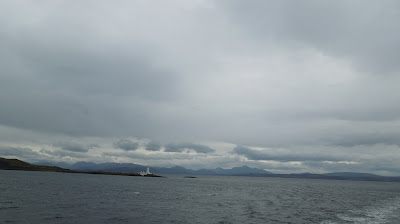 Click on the above photo to enlarge it and get a good view of the Sound of Mull. I did have to bundle up and venture outside to take some pics myself. I took several of Duart Castle as we passed by. Little did I know at the time that we would explore Duart from the ramparts to the grassy area near the shore.


Duart Castle stands prominently on a cliff that overlooks the Sound of Mull. This has been the base of the Clan Maclean for over 600 years.

Once we disembarked at Craignure on Isle of Mull we found the bus for the Duart Castle tour waiting for us. Part of the way, the road was one lane. It took ten to fifteen minutes to get to the castle.

We entered the courtyard and I thought the interior and buildings were beautiful. This castle was restored in the early 1900s, but these buildings look incredibly authentic for hundreds of years ago. The rowan tree here (above) was planted on Sir Fitzroy Maclean's 100th birthday. It's believed to ward off evil.

The castle was restored between 1911 and 1914 by Colonel Sir Fitzroy Maclean, Bt., KCB, Twenty-sixth Chief of Clan Maclean. Before that, the castle lay in ruins.

Information from other signs posted here:


"About 1150 Duart was just a courtyard. No grass then, only mud and rocks and simple wooden shacks for shelter. You would have had no shoes or socks, even in winter; long hair, no brushes or combs and your clothes would be a simple strip of woolen cloth to keep you warm."

"The Keep, which is another name for a Tower House, is where everyone lived. This one was built by Lachlan Lubanach, the 5th Chief, in 1360. The main entrance was up a short flight of stairs from the courtyard." 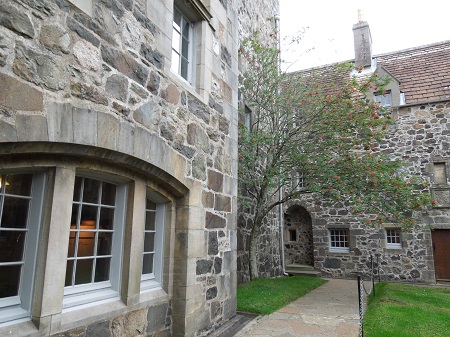 Next, we went by the kitchen and dungeon. Sorry, no photos were allowed of the interior. The ground floor of the castle was originally one vaulted room with two small windows.

Experts believe a castle existed on this site long before the first walls of Duart were constructed in the mid-1200s because it is such a strategic position on a high cliff on the end of a peninsula which juts into the Sound of Mull. Duart comes from the Gaelic Dubh Ard, meaning 'Black Point'. This location allowed the Macleans to control the Sound of Mull, which runs between Mull and the mainland of Scotland, and also the entrances to Loch Linne and Loch Etive and also part of the Firth of Lorn. This site would've been of vital importance during Viking and Norse invasions. Later, the Lord of the Isles ruled this area and the Macleans were supporters. There were eight castles on each side of the Sound of Mull which could communicate with one another via a beacon.

Maclean means 'Son of Gillean.' Gillean of the Battle-Axe (Gilleathain na Tuaidh) was a warrior who lived in the 1200s. He is known to have been alive in 1263. One of his ancestors was Lorn, the brother of Fergus Mor MacErc, founder of the Dalriadic kingdom which centered in Argyll. Gilleathain fought at the Battle of Largs and his son Gillenmore is mentioned in the Ragman Roll of 1296. The Macleans supported Bruce at Bannockburn. After that, they settled on Isle of Mull and came into conflict with the MacKinnons who already lived here. 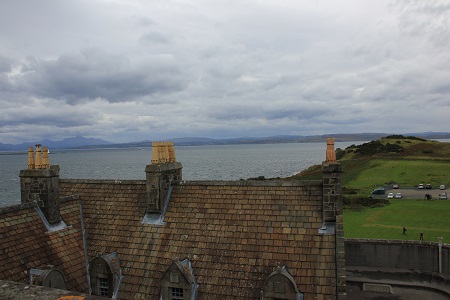 Macleans were recorded in the papal dispensation of 1367 which allowed their chief, Lachlan Lubanach (the crafty or cunning) Maclean to marry the daughter of the Lord of the Isles, Mary Macdonald. It is said this was a love match, but her father wouldn't allow her to marry Maclean until he had kidnapped her. Another account says Lachlan kidnapped the Lord of the Isles in order to marry his daughter. The Mackinnon Chief was killed during this incident, and since Macdonald was Lord of the Isles, he gave the Mackinnon land to Maclean as part of his daughter's dowry. It is said he approved of Lachlan as a husband for his daughter because of his daring during the kidnapping. This is how the Macleans ended up owning most of Mull.

Lachlan Lubanach Maclean is believed to have built the keep at Duart. The first mention of Duart was 1390. But the great curtain walls already existed from the previous century. On the more vulnerable landward side, the walls are 29 feet high and almost 10 feet thick. A ditch was cut through the rock beyond the wall for further defense. The walls facing the sea were not as thick, 5 – 8 feet.

Lachlan Lubanach's son was Red Hector of the Battles. He was a famous Maclean warrior who fought at the Battle of Harlaw on July 24, 1411. I mentioned him in my post on Drum Castle. Sir Alexander Irvine of Drum and Red Hector MacLean engaged in a one on one personal battle to the death. Yes, both men died. I wonder what they had against each other? Afterward, their families exchanged swords when their chiefs met.


Hope you enjoyed the photos and info. I'll continue the tour of Duart next time.
Thanks!!
Vonda
www.vondasinclair.com 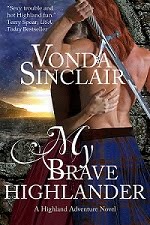 Battle-hardened warrior Dirk MacLerie isn't who everyone thinks he is. He's Dirk MacKay, heir apparent to the MacKay chiefdom and Dunnakeil Castle on the far north coast of Scotland. When he returns home after a long absence, will his clan know him and will the duplicitous enemy who tried to murder him twelve years ago kill him in truth this time?
Lady Isobel MacKenzie is a beautiful young widow betrothed to yet another Highland chief by her brother's order. But when her future brother-in-law accosts her and threatens to kill her, she is forced to flee into a Highland snowstorm. When she runs into a rugged and imposing man she thought dead, she wonders if he will turn her over to her enemy or take her to safety.Dirk remembers the enchanting, dark-eyed Isobel from when he was a lad, but now she is bound to another man by legal contract—an important detail she would prefer to forget. She wishes to choose her own husband and has her sights set on Dirk. But he would never steal another man's bride… would he? The tantalizing lady fires up his passions, testing his willpower and honor at every turn, even as some of his own treacherous clansmen plot his downfall.
By Vonda Sinclair at May 28, 2013
Email ThisBlogThis!Share to TwitterShare to FacebookShare to Pinterest
Labels: Duart Castle, Highland romance, historical romance, Scotland travel, Scottish Castles, Scottish romance, Vonda Sinclair

I love your photos Vonda! I'm so excited, we are leaving in 13 days.
Honestly, I'M a bit nervous! don't know why, maybe it's because I don't know what to expect. thanks dfor sharing your trip!
Nicole

Sorry you were sick--how disappointing!

Someone in our party got sick eating baked beans on one of those ferries out of Oban.

How awesome, Nicole! You will have a wonderful time! I was also nervous the first couple of times I went, so that's natural.

Thank you, Angelyn! It was no fun having a cold on vacation, but I mostly ignored it and enjoyed everything. Oh no. I'll be sure to not eat baked beans on the ferry.

Thank you for this, Vonda. Love the photos. :)

What an amazing and haunting place. Great pictures, Vonda. Thanks!

Thanks Gerri! I'm glad you liked it!

Thank you, Vanessa! I agree, it is amazing and haunting.

What great pictures. Loved the excerpt. I tweeted.

Thank you so much, Ella!

I was reading your post to hubby. We both remember the ferry ride and bus journey on that one lane road. All of it so beautiful seeing what you saw through the lens of your camera. I don't know if I should look at your beautiful photos or not because you know it makes that driving force to return to the homeland stronger with each one of your posts. Thank you, Vonda.

Thank you for sharing your photos and travelogue! They bring back so many fond memories. I'm looking forward to the continuation of the story, too. Can't wait to see those majestic interior rooms again :)

Thank you so much, Paisley! I'm so glad you enjoyed it and that it brought back great memories for you and your husband. :)

DeAnna, thank you for checking it out! I'm glad it brought back fond memories for you. It is a wonderful castle!

Beautiful photos of the Sound of Mull and Durant Castle. Thanks for the tour.
Brenda

Always great to stop by! Thank-you for the awesome photos Vonda:)

Thank you, Brenda and Jennifer! I'm so glad you both liked them!

Sorry to hear about being sick then. That makes for miserable traveling. I would have had to send my DH out to take pics too, so I could browse the souvenir shop. :-)

It'd be hard to write a romance in that 1150 time period there. It sounds so primitive.

I got lost in the history and pictures, so I feel like I've been there now. How incredible!

Thanks, Julie! Being sick was no fun at all. I was glad I didn't feel too terrible though. I suppose just being in Scotland made me feel pretty good.

It does sound pretty primitive in 1150 doesn't it? It was a very hard life I'm sure, considering how harsh the weather can be on the islands. The wind off the sea is fierce at times. I'm so glad you enjoyed it!