Why Do we Love Tortured Heroes? 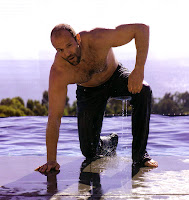 Why Do we Love Tortured Heroes?
by Marie-Claude Bourque

A few people have asked me whether I got upset by one of the judge comment in the latest round of American Title (read it here if you haven’t had a chance yet: http://www.romantictimes.com/news_amtitle3.php).


The truth is, no. In fact, I thought she was quite funny and I was quite happy that she found my hero gripping. I love tortured heroes. In fact the whole world I built for ANCIENT WHISPERS is based on tragic lovers of old, on heroes with tragic past. They are tortured, hence tough, mysterious, with nothing to lose. Their misery just begs for the right heroine to give them back happiness.

Why do we love tortured heroes? Why am I swept by Sherrilyn Kenyon’s Dark Hunters, most of them with background of slavery or betrayal? Why do I find J.R. Ward brothers so compelling? In real life, her vampires would be extremely scary, but what is it that makes me want their happiness, is it their tortured side? The glimpse that they may be redeemed with the love of one brave heroine? Even Julia Quinn has her share of tortured heroes. One with a stutter so bad his father wouldn’t acknowledge him and one tortured by the memory of an unfaithful first wife. In paranormal romance, they are the vampire, the werewolf, or even the demon. In regency, they are the devilish rake and rogue who hide his tragic past by creating scandals among the ton and charming the young misses.


The tortured hero is the highlander who lost his family to the English empire (I say BraveHeart and my heart beat faster!). He is the pirate who was captured as boy to be sold in slavery and is now taking his revenge.
Christopher’s Vogler in the Writer’s Journey even has a name for this hero, he is not new. He is the “Wounded Anti-Hero”… a hero played often by Bogart or James Dean on the screen. To quote Vogler: “We love these characters because they are rebels, thumbing their noses at society as we would all like to do.”

They belong to the edge of society, they are dangerous and we just loved them. Edward Cullen in Twilight, Hugh Jackman as Wolverine (isn’t the upcoming X-Men movie all about his tortured past) and another of my favorite, Jason Staham as the Transporter. Don’t we all die to be the woman who will make them happy? Isn’t it so much more of a challenge for us when they are already so far lost?

Oh yes!
He was great! Haven't seen that movie in ages. Makes me what to see it again :)

Susan,
I haven't read that one. I'll have to check it out!

I love tortured heroes. I took a stab at one in my upcoming Red Sage Presents novella, Dark Angel.

My favorite tortured heroes were from the old Laura Kinsale historicals, The Prince of Midnight and Flowers in the Storm. I still sigh over them...

Good luck with Ancient Whispers. I hope to read it someday!

Ah yes, I think the lure of the tortured hero is that "we" could be the one to save him. (It's a pain in the ass in real life, having tried and failed at redeeming my own tortured hero.) But my first fantasy tortured hero was Napier in Victoria Holt's The Shivering Sands.

Natasha,
I'll have to look for that release...Dark Angel...does sound tortured :D
Thanks for the good luck wishes with Whispers :)

I have to agree Carol,
saving the tortured hero only works in novel....do not try this at home lol

I'd also have to agree that Kyle from Terminator was a great tortured hero. They are already setting up John Conner in the new series to be the tortured hero. Another fave of mine would have to be Jason Bourne.

Angelia,
I love Jason Bourne too. And Matt Damon is such a good actor, he makes the character tortured, but not over the top. Very believable IMHO.

I always think of Jamie in Diana Gabaldon's series. Clare always seems to draw him back from the edge with her love.

Great blog, Marie-Claude.
I believe that as females, we are learn early that if we are helpful, we get social approval and acceptance. In general, We are encouraged to be more expressive, whereas men are not. They, therefore, learn to keep those feelings bottled up, while we, due to our childhood learning and female tendencies, want to help the male with his tortured feelings, which are in part, due to not being able to express them.

Take this basic difference between males and females and add some trauma or crisis which the hero has endured, then a man becomes someone a female wants to help. It's the knowing that the heroine is special enough to have the hero open up to her and heal his wounds, which appeals to the healer, the nurturer within women. Unfortunately in real life, most men don't get past that perspective to see the total woman. And who wants to b a mother figure to their man!.

So yes, I love a tortured hero in fiction, not in life.

Excuse me, MC. I think I got carried away on a rant!!
Julie

Oh, I love Jason Bourne as a tortured hero, but I also love Bruce Wayne in Batman.
Julie

Teresa,
I have to be honest, I tried to read Gabalbon but I didn't speak English that well then, and didn't get into it. But it's on my TBR list :)

Love your rant Julie :)
Yes, saving a tortured man with a past just doesn't work in real life!!!
Who wants to be a mom to a grown-up LOL

Fantastic post, Marie-Claude!! I'm so glad you're a guest blogger today at Fierce Romance! How awesome!! I LOVE tortured heroes. Like Natasha I'm a huge fan of Laura Kinsale and her tortured, imperfect, unforgettable, yummy heroes. Even putting a little "tortured" in an otherwise fairly well-adjusted hero can make him lots more interesting.

Glad to be here Vonda :)
I'm in a historical romance phase right now, working my way through all the Julia Quinn. I'll check out Laura Kinsale next!!!

I adore tortured heroes, Marie-Claude! I suppose my favorite will always be my own Rory O'Brien from my first novel, In Sunshine or in Shadow, >g<, but I LOVE Michael Kenyon from Mary Jo Putney's Shattered Rainbows.

Marie-Claude - Nice to see you here at Fierce Romance.

My current tortured hero would be Maddox from Gena Showalter's The Darkest Night.

Best of luck with AT.

Super post, Marie-Claude! I love tortured heroes. :) That's probably why in Destiny of the Wolf, poor Darien is so tortured. :)

Good luck on AT!!

I have to throw in my vote for Nora's tortured hero, Rourke, in her JD Robb In Death Series. He's got a dismal enough past to make him vulnerable, but he's drawn his strength from it, so he's not dysfunctional. LOVE that man! I'd try my hand at his troubles, if I wasn't afraid Eve would kick my ass! Great and fun post, Marie-Claude!

Hi Cynthia,
boy...you are giving me more books to check out for my TBR pile. Thanks for sharing :)

Hi Elen,
Thanks for your good luck wishes :)
And for your welcome at Fierce Romance, so glad to be here.
Gena Showalker....yes, already on my TBR pile :)

Thanks for inviting me over Terry. Yes, I guessed that you loved tortured heroes...I mean werewolf, what do you expect !!!! Sexy as well right :)

Hi Jeffe,
You know, I honestly couldn't get into Nora stuff until I got my hands on her JD Robbs stuff. I really like Eve and Roarke and yes, he has that tortured side to him!

Right now it's Edward in Twilight! Love that guy even if I am an old lady! I liked my own tortured creation in Circles in Time, Navarre. Tortured heroes are the best!

You've hit upon my absolute favorite sort of hero - even as young as a little girl, my favorite heros were tortured - the Scarecrow of Oz and the Tin Woodman.

Nowadays I swoon over the dark, torment of a hero. From Jean Claude, Asher, Richard and Micah in Laurell K. Hamilton's Anita Blake, Vampire Slayer series, to the often physically, as well as emotionally, tortured heros of Sherilyn Kenyon's Dark Hunter and Dream Hunter books, to the gentlemen of the historical romances who hide their emotional scars beneath cool civility and social manners. Nothing like seeing a man unravel at the hands of a beautiful, loving woman as she heals him. And that, of course, is why we love them. They appeal to the maternal, to the compassion, to our internal Florence Nightengales. And they are only vulnerable with the heroine. Only she can heal him or bring him to his knees. To the rest of the world he is the invicible, stoic, suffering soul.

But my favorite? Hmmm...well, Heathcliff, Wuthering Heights. The poster boy for wounded hero.

Happy New Year and may 2009 be filled with creative energy and publishing successes and hey, why not a bit of KA-CHING!